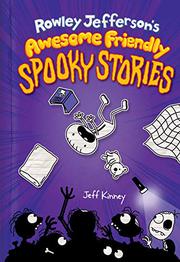 From the Awesome Friendly kid series

Actually, the scariest thing here is the cautionary preface, which warns away the easily frightened with enticing promises of “skeletons and zombies and human heads.” The stories deliver all of these and more, but invariably in a vein more comical than chilling—Anders, a disembodied head, matches up in school with Gunther, a headless body, to go after attractive classmate Prudence; an airport scanner turns everyone into skeletons (fun for a while, if boring at Halloween); a town survives the zombie apocalypse by creating “brains” made of tofu. In other highlights, two mummies duke it out in court after one trademarks “The Mummy” as a brand, and to win a science fair, young Victor literally makes a friend after visiting the cemetery behind his house. Rowley, credulous as ever, relates in the “100 percent TRUE” capper how his friend Greg Heffley became possessed by a demon after watching a horror movie on a sleepover and was only restored to himself by an application of toilet (in lieu of holy) water. Along with droll twists aplenty (Prudence ultimately goes off with Anders, leaving Gunther to grow up and become the Headless Horseman), Kinney tucks in one or more outline drawings on every page featuring racially indeterminate but White-presenting figures expressing, usually, exaggerated joy or dismay.

Pitched for chortles, not chills.