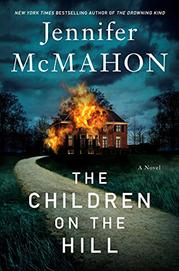 THE CHILDREN ON THE HILL

Inspired by Frankenstein, McMahon presents a number of “monsters” linked to a psychiatric hospital in the 1970s—and one contemporary monster hunter who must confront her past.

In 1978, Vi and Eric live with their grandmother Dr. Helen Hildreth on the grounds of the Hillside Inn, a private hospital in Vermont that specializes in “a holistic, humanistic approach” to healing the mentally ill. When Dr. Hildreth brings home a young patient named Iris, the children are both fascinated and repelled by her—especially the raised scars she hides under a hat. Iris has clearly survived some great trauma, and Vi agrees to help her grandmother by “treat[ing] [Iris] like a sister” and reporting on anything the girl reveals about her past. A curious child, Vi begins to wonder whether Iris might be the mysterious “Patient S” her grandmother has written about in secret case notes. Forty years later, Lizzy Shelley, a researcher and podcaster who has recently entered the public eye by consulting on the TV show Monsters Among Us, follows a lead that brings her close to a monster she’s been seeking for some time, a monster that abducts young girls while hiding behind local legends, a monster who is leading her back to Vermont and the Hillside Inn. Like Dr. Frankenstein's infamous creation, the novel is a patchwork of narrative voices and styles, combining Vi, Eric, Iris, and Helen’s story in 1978; Lizzy’s search in 2019; excerpts from a tell-all book, The True Story of the Hillside Inn; excerpts from The Book of Monsters, created by the children in 1978; and the voice of the Monster herself. Though the question asked is not a new one—“Who is the real monster? The creature being made, or the one creating it?”—McMahon succeeds admirably in building real chills and a surprising twist, offering a satisfying addition to the Frankenstein-inspired oeuvre.

Mary Shelley would give it two thumbs up.