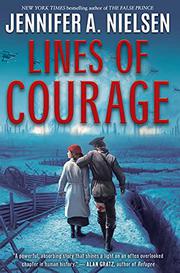 Five teenagers from across Europe lead coincidentally intersecting lives during World War I.

The day that 12-year-old Felix witnesses the assassination of Archduke Franz Ferdinand, everything changes. His father goes to war, and Felix loses the relative safety afforded to Jews in the Austro-Hungarian Empire. His city is invaded by imperial Russia, and the Jews and Roma of Lemberg might be shipped to internment camps. With the help of Elsa, a German girl, Felix and his mother escape. Though they go their separate ways, Felix and Elsa will meet again, along with British Kara, French Juliette, and Russian Dimitri. Kara wants to be a doctor and works as an orderly on a Red Cross train, Juliette seeks her lost family, and Dimitri is a miserable soldier in the trenches. The chain of coincidences that repeatedly bring these teens into each other’s lives is increasingly improbable until they resolve five years later, on the last day of the war to end all wars. While the events are packed with historical facts, the overall framing feels ahistorical: the British are kind, competent rescuers; to be a good German requires being opposed to one’s countrymen; and a Russian sees “freedom” from both the tsar and Lenin in the land-mined French countryside.

Adventures across a massive war and pandemic make for a tidy tribute to common understanding.