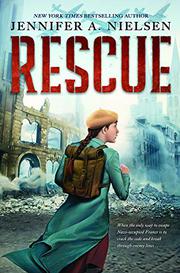 A 12-year-old Resistance fighter must decode her father’s final message and save him.

Meggie hasn’t seen her British father in two years, ever since the Nazis invaded France and Papa left to fight. She and her French mother have left their home close to the border with Germany and are living with her French grandmother on a farm in a rural part of the Occupied Zone. Meggie discovers Capt. Henry Stewart, an injured Englishman, in her family’s barn, and he gives her a poem that her father wrote. He also asks her to take a family on the run to safety; in exchange, they will reveal the whereabouts of Meggie’s father, a spy on the run. The plot suffers from the ultimate deus ex machina, a backpack Capt. Stewart gives Meggie that contains every item she will ever need—a spy manual, money, blank ration cards, explosives, and a map (covering over 100 kilometers yet still so detailed it shows individual buildings in a Parisian suburb)—which is somehow never lost or searched by the Nazis. Meanwhile, Meggie solves each piece of the coded poem exactly in time to use the specific information revealed. While the premise is an exciting one and the subject matter is an unusual spin on World War II stories, the novel fails to generate sufficient suspense to maintain readers’ interest.

Fails to stand out.