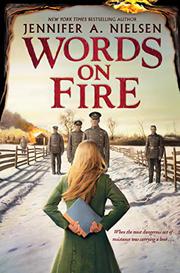 Audra doesn’t understand what her parents are hiding until the Cossacks come to arrest them.

It’s June 1893, in what used to be the country of Lithuania but has been part of Russia for years. Twelve-year-old Audra has spent most of her life on her parents’ farm. Her stage-magician father travels, and Audra knows he and her mother are doing something illegal, but she doesn’t know what. When Officer Rusakov arrests them and sets fire to their home, Audra discovers that they’ve been smuggling books—printed in Lithuanian. The Russians long ago banned that language, spoken or written, in an attempt to force assimilation. Even though everyone speaks both languages (Lithuanian in secret), Audra’s parents have kept her illiterate rather than have her attend Russian school. Now she joins a group of rebels smuggling books from printers in Prussia: adults Milda and Ben, and Lukas, a boy her own age. Magic tricks her father taught her allow her to distract her pursuers rather than hide from them. Written from Audra’s first-person point of view, with an all-white cast in keeping with its Eastern European setting, the novel suffers a bit from inconsistent pacing but delivers believable action and suspense. The Cossack leader comes across as a typical evil Russian, but the other characters are more fully drawn.

Overall, a solid adventure about a little-known place and time.