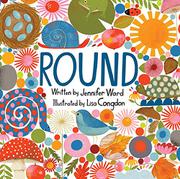 A rhyming glimpse at round shapes in nature.

“Nature all around is round,” begins this exploration of shapes round or partially round in nature, beginning with a tiny bird and ending with the planets in our solar system. The pair of two-word phrases in each illustration, each dyad ending with “round,” rhymes: “Glowing round. / Growing round,” reads the text in a spread that features fireflies encased in rings of lights and a crescent moon. In a spread featuring a frog, the creature hangs on tight to a lily pad caught on a small current (“Cling round”) and then jumps into the water, creating ripples in the water that “Ring round.” Some pairings will prompt discussion more than others, such as an empty nest that is “Nest round” paired with a nest filled with bird eggs that is “Best round.” Children will notice that the shapes featured aren’t all circular in nature; some have merely rounded edges, such as the budding leaves on a tree, raindrops, and clouds. Most phrases are modified nouns, such as “Flake round,” though one is a full sentence (“Make round” for a snowman on the same spread), and some are modified verbs. The primarily earth-toned, uncluttered spreads provide a simplified, close-up look at the natural elements and animals named as round. Readers would be better served by Joyce Sidman’s and Taeeun Yoo’s Round (2017), in which all shapes are circular. (This book was reviewed digitally with 10-by-20-inch double-page spreads viewed at actual size.)

A clever, if not new, concept with uneven execution.