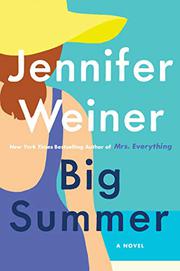 A plus-size Instagram influencer stumbles into a murder mystery when called to serve as a bridesmaid for her fabulous former best friend.

Weiner’s 14th novel, and her second with a murder plot, is also a short course in social media lingo and best practices. At its center is Daphne Berg, a classic Weiner heroine—a young New Yorker who supports herself by working 20 hours a week as a nanny, by selling crafts in her Etsy store, and through sponsorships of Instagram posts for both her (yoga mats, makeup, plus-size fashion) and her pooch (organic dog treats). Her career began accidentally in her sophomore year of college, when her No. 1 frenemy, an exquisitely lovely heiress named Drue Lathrop Cavanaugh, lured her into a humiliating setup in a bar, the last of a long series of mean tricks that began in high school. When her date called her a “fat bitch” and Daphne responded with fury—“I am fat. But that doesn’t mean you get to treat me like garbage”—and video of the incident went viral, she chose to embrace the moment. She has since become a beloved internet avatar of body acceptance #sorrynotsorry #justasIam. Drue has been out of her life for seven years when she bursts back in to beg Daphne to be her bridesmaid at a spectacular, made-for–social media Cape Cod wedding. Against her better instincts, Daphne agrees, and before long she is handmaiden at #drueandstu2020, a beachfront extravaganza Weiner really outdoes herself in describing. Things are going a lot better than Daphne ever could have dreamed—hot sex scene alert!—when the plot takes a turn for the Agatha Christie. But no matter what mayhem transpires, you can always count on Weiner for delicious food. “I squeezed lemon onto my first oyster, added a dollop of cocktail sauce, tipped it into my mouth and gulped it down, humming in pleasure at its sweet, briny taste.” “My mother hugged me hard, and my father mixed up a pitcher of Sidecars and served us his cioppino, with toasted wedges of garlicky toasted baguette.” “Get the malasadas, if they’re fresh.” Turns out they are, and so is this novel.

If you love Jennifer Weiner, you’ll love this one. And if you’re a newbie, start here.