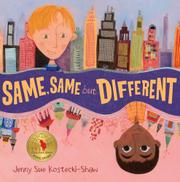 Although today’s kids usually communicate through texting or email, Elliot from the United States and Kailash from India use pictures and a few simple sentences to exchange information about their lives.

Their teachers facilitate the snail mailing of pictorial letters, just as the author-illustrator did when she visited Nepal, which provided the inspiration for this book. The title, also used as a refrain throughout the book, is a popular saying in India and Nepal, heard by Kostecki-Shaw when she traveled there. Elliot and Kailash explore their similarities and differences, concluding that their lives are “Different, different but the SAME!” The engaging childlike acrylic paintings with crayon, pencil, tissue paper and other collage elements show the busy crowded American streets of Elliot’s city, the traditional buildings of Kailash’s riverside village, the taxis and buses in the States and the taxis and camel-pulled carts in India. The English alphabet is reproduced on wide-ruled notebook paper and the Hindi alphabet (unfortunately unidentified) on a small slate, and both typical American pets (dog and fish) and a whole farmyard of Indian animals appear. Both kids live unusually low-tech lives (no computers or cell phones in sight), but they each enjoy learning about their pen pal’s world.

Purposeful, but saved from didacticism by the sheer exuberance of the illustrations; the accessible text introduces the idea of traditional two-way communication and demonstrates just how small our world can be. (Picture book. 5-7)