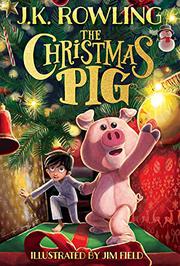 A 7-year-old descends into the Land of the Lost in search of his beloved comfort object.

Jack has loved Dur Pig long enough to wear the beanbag toy into tattered shapelessness—which is why, when his angry older stepsister chucks it out the car window on Christmas Eve, he not only throws a titanic tantrum and viciously rejects the titular replacement pig, but resolves to sneak out to find DP. To his amazement, the Christmas Pig offers to guide him to the place where all lost Things go. Whiffs of childhood classics, assembled with admirable professionalism into a jolly adventure story that plays all the right chords, hang about this tale of loss and love. Along with family drama, Rowling stirs in fantasy, allegory, and generous measures of social and political commentary. Pursued by the Land’s cruel and monstrous Loser, Jack and the Christmas Pig pass through territories from the Wastes of the Unlamented, where booger-throwing Bad Habits roam, to the luxurious City of the Missed for encounters with Hope, Happiness, and Power (a choleric king who rejects a vote that doesn’t go his way). A joyful reunion on the Island of the Beloved turns poignant, but Christmas Eve being “a night for miracles and lost causes,” perhaps there’s still a chance (with a little help from Santa) for everything to come right? In both the narrative and Field’s accomplished, soft-focus illustrations, the cast presents White.

Plays to Rowling’s fan base; equally suited for gifting and reading aloud or alone.