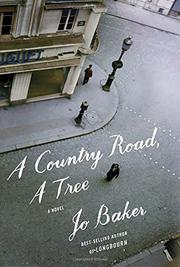 A COUNTRY ROAD, A TREE

The experiences of a struggling Irish writer in France during World War II—joining the Resistance, fleeing the Gestapo, risking everything again after escaping to the free zone—will help shape his groundbreaking literary future, suggests this novel based on the life of Samuel Beckett.

Having turned Jane Austen's Pride and Prejudice on its head in Longbourn (2013), Baker moves on to more recent but bleaker literary pastures with a biofiction tracing the life of Beckett, the brooding "spindly giant," from 1939 to 1946. Before the war begins, the young author has escaped his difficult relationship with his mother by settling in Paris, where he finds work as a secretary to James Joyce, a partner named Suzanne, and a creative community. However, once war is declared and Paris falls, life becomes increasingly harsh and is further darkened by Joyce's death. Beckett joins the Resistance, his role to find patterns in scraps of information. But the cell is betrayed, and Beckett and Suzanne are forced to flee, enduring a terrifying journey to Roussillon, which includes an interminable wait by a tree in a nameless place, a woman who can't stop talking, and the constant agony of ill-fitting boots. These passing but pointed references to Beckett’s great works to come—Waiting for Godot, Not I, etc.—and philosophical speculations (“And so one finds one goes on living…”) are intrusive. Baker’s impressionistic character portrait works hard at evoking a questing, solitary intelligence during a period of physical and mental anguish and wholesale destruction, but Beckett is a world-class literary enigma, and any such attempt was perhaps always going to fall short of full-blooded conviction.

Baker’s virtuoso imagining of war’s terrors and privations is not quite matched by her depiction of a unique, consistently elusive artistic identity.