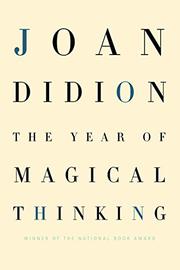 THE YEAR OF MAGICAL THINKING

A moving record of Didion’s effort to survive the death of her husband and the near-fatal illness of her only daughter.

In late December 2003, Didion (Where I Was From, 2003, etc.) saw her daughter, Quintana Roo Dunne, hospitalized with a severe case of pneumonia, the lingering effects of which would threaten the young woman’s life for several months to come. As her daughter struggled in a New York ICU, Didion’s husband, John Gregory Dunne, suffered a massive heart attack and died on the night of December 30, 2003. For 40 years, Didion and Dunne shared their lives and work in a marriage of remarkable intimacy and endurance. In the wake of Dunne’s death, Didion found herself unable to accept her loss. By “magical thinking,” Didion refers to the ruses of self-deception through which the bereaved seek to shield themselves from grief—being unwilling, for example, to donate a dead husband’s clothes because of the tacit awareness that it would mean acknowledging his final departure. As a poignant and ultimately doomed effort to deny reality through fiction, that magical thinking has much in common with the delusions Didion has chronicled in her several previous collections of essays. But perhaps because it is a work of such intense personal emotion, this memoir lacks the mordant bite of her earlier work. In the classics Slouching Toward Bethlehem (1968) and The White Album (1979), Didion linked her personal anxieties to her withering dissection of a misguided culture prey to its own self-gratifying fantasies. This latest work concentrates almost entirely on the author’s personal suffering and confusion—even her husband and daughter make but fleeting appearances—without connecting them to the larger public delusions that have been her special terrain.

A potent depiction of grief, but also a book lacking the originality and acerbic prose that distinguished Didion’s earlier writing.