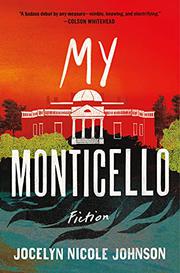 Stories centered on racism and Virginia, anchored by a dystopian tale set in Thomas Jefferson’s home.

The title novella that closes Johnson’s debut book is stellar and could easily stand on its own. Plainly inspired by the deadly 2017 Unite the Right rally in Charlottesville, Johnson imagines a near future in which an “unraveling” has forced some of the town’s brown and Black residents to find safety on Jefferson’s homestead. The narrator, a University of Virginia student named Da’Naisha, is a descendant of Jefferson and Sally Hemings and used to have an internship on the Monticello grounds. She’s well aware of the irony of taking cover on a former plantation, but she has more pressing issues: She’s pregnant, uncertain of the father, and her grandmother is suffering from asthma but lacks medicine. In depicting Da'Naisha's attempts to organize her fellow refugees to fend off an impending attack from marauding racists, Johnson crafts a fine-grained character study that also harrowingly reveals how racist violence repeats. Not all of the remaining stories have the same force, but Johnson has a knack for irony and inventive conceits. “Buying a House Ahead of the Apocalypse” is a story in the form of a checklist, suggesting all the ways that pursuing a sense of security can be products of self-delusion (“Never mind the dark-skinned guard who wouldn’t even let you in…”). And the opening “Control Negro” is narrated by a man who uses his son to study whether a Black man who's “otherwise equivalent to those broods of average American Caucasian males” could transcend racism. In a few taut pages, Johnson uses the setup to explore not just institutional racism, but fatherhood, fatalism, policing, and social engineering. “How does anyone know if they are getting more or less than they deserve?” the narrator asks, a question the story makes both slippery and plain as day.

A sharp debut by a writer with wit and confidence.