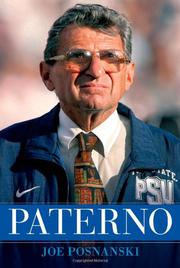 Sensitively shaded portrait of the late Penn State football coach, an ethical man who failed to “go to the ball” when it really meant something.

When former Sports Illustrated reporter Posnanski, now a senior writer for the website Sports on Earth, set out to write Paterno’s biography, it looked like a dream assignment: The author would be in intimate contact with Paterno and his family, with access to his files about the Penn State football program. This book does have that intimate, backstage feel, and Posnanski tells a story no one else is ever going to get. His voice is warm, but frequently touched by melancholy, because it recounts Paterno’s shattering fall from grace after Jerry Sandusky, the team’s defensive coordinator, was convicted on 45 counts of child molestation. Posnanski offers a number of scenarios to contextualize Paterno’s failure to investigate the allegations that led to Sandusky’s conviction, most persuasively his protectiveness of the program and conviction that the problem could be dealt with in-house. Posnanski draws for readers a man who had a passion for education and saw his players as students first; Penn State athletes had a terrific graduation rate. He would pepper pep talks with Shakespeare; Virgil was his guide. “You have to listen for the divine word that tells you your destiny,” Paterno said to Posnanski. The author charts the many highs and lows of a 61-year career in the voices of both friends and foes. He also traces the dwindling scope of Paterno’s idealism, as the coach grew more crotchety and remote in later years.

Despite Posnanski’s sympathy for his Ivy-educated, Brooklyn street-fighting subject, the book never escapes from the pall of the debacle that ended Paterno’s career.