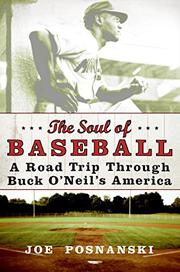 THE SOUL OF BASEBALL

Journalist Posnanski (The Good Stuff, 2001) accompanies a baseball legend on a cross-country journey to raise awareness of the Negro Leagues.

Buck O’Neil, who died at the age of 94 in 2006, is said to have charmed everyone he met, from schoolchildren to men old enough to remember Negro League greats like Satchel Paige and Josh Gibson. Posnanski masterfully conveys O’Neil’s charisma and the rhythm of his words, which often read like free verse. The author trailed his subject as he traversed the country to rekindle interest in the talented players who pushed their way from state to state on rickety buses in an era when Major League Baseball excluded black players. O’Neil’s unceasing efforts helped several Negro League stars get inducted into the Baseball Hall of Fame. Despite being a good player, manager and scout in his own right—not to mention a tireless ambassador for the game—he fell one vote shy of election, an injustice decried by his admirers. But O’Neil was not bitter. If baseball was his first love (with jazz a close second), his main occupation was living life the same way he played the game: with unabashed joy and passion. O’Neil’s credo was “you don’t ever walk by a red dress,” and his greatest asset was not his ability to hit a fastball but his talent for establishing a connection with those he encountered. He saw goodness in the world despite having been deprived of numerous opportunities because of the color of his skin.

A worthy paean to an American legend.