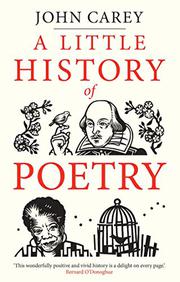 A LITTLE HISTORY OF POETRY

A light-speed tour of (mostly) Western poetry, from the 4,000-year-old Gilgamesh to the work of Australian poet Les Murray, who died in 2019.

In the latest entry in the publisher’s Little Histories series, Carey, an emeritus professor at Oxford whose books include What Good Are the Arts? and The Unexpected Professor: An Oxford Life in Books, offers a quick definition of poetry—“relates to language as music relates to noise. It is language made special”—before diving in to poetry’s vast history. In most chapters, the author deals with only a few writers, but as the narrative progresses, he finds himself forced to deal with far more than a handful. In his chapter on 20th-century political poets, for example, he talks about 14 writers in seven pages. Carey displays a determination to inform us about who the best poets were—and what their best poems were. The word “greatest” appears continually; Chaucer was “the greatest medieval English poet,” and Langston Hughes was “the greatest male poet” of the Harlem Renaissance. For readers who need a refresher—or suggestions for the nightstand—Carey provides the best-known names and the most celebrated poems, including Paradise Lost (about which the author has written extensively), “Kubla Khan,” “Ozymandias,” “The Charge of the Light Brigade,” Wordsworth and Coleridge’s Lyrical Ballads, which “changed the course of English poetry.” Carey explains some poetic technique (Hopkins’ “sprung rhythm”) and pauses occasionally to provide autobiographical tidbits—e.g., John Masefield, who wrote the famous “Sea Fever,” “hated the sea.” We learn, as well, about the sexuality of some poets (Auden was bisexual), and, especially later on, Carey discusses the demons that drove some of them, Robert Lowell and Sylvia Plath among them. Refreshingly, he includes many women in the volume—all the way back to Sappho—and has especially kind words for Marianne Moore and Elizabeth Bishop, who share a chapter.

Necessarily swift and adumbrative as well as inclusive, focused, and graceful.