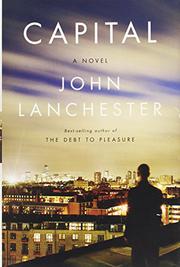 Elegant, elegiac, eloquent novel of London life in the time when things lolly-related are definitively beginning to fall to pieces.

Pepys Road was once such a nice street, a place destroyed by a V-2 rocket in World War II and rebuilt in such a way that aspirational veterans and young people could buy a stake in the British Dream. But that was then. Now, in 2007, after boom and bust and boom and bust, in a time of “bonuses which were big multiples of the national average salary, and a general climate of hysteria [that] affected everything to do with house prices”—well, only the rich can afford to buy in, and the old-timers are increasingly besieged. One of them is the well-heeled and pound-laden banker around whom Lanchester’s (Fragrant Harbor, 2002, etc.) novel, as leisurely and complex as an Edith Wharton yarn, turns. But even he is much put-out, since his wife can’t seem to get it in her head that money is not simply a thing to be spent at every waking moment. Meanwhile, from out in the darkness, messages are raining down, vaguely threatening, saying, “We want what you have.” Ah, but practically everyone in this book wants everything, and those who don’t want at least something that they don’t have, from lost youth to a little peace and quiet. Who are the authors of these mystery demands? One thing that DI Mill (think, fleetingly, of John Stuart) concludes is that, first, they’re not Nigerians or Kosovars or Eskimos, and second, though capable of better things, he’s glad to have the distraction, even if “when he was doing routine repetitive work, that it was the equivalent of harnessing a racehorse to a plough.” Mill finds plenty to do, and so does Roger, our banker, who’s got a financial empire to save on top of his own bankbook and marriage.

An expertly written novel of modern manners, with moments that read as if David Lodge or Malcolm Bradbury had stepped out of academia to take on the world of money and power.