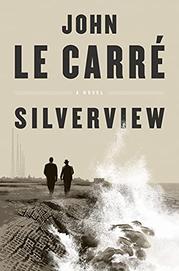 Le Carré, who died last December, offers his many fans one final gift: a short novel begun soon after A Delicate Truth (2013) and completed years ago but unpublished till now.

Julian Lawndsley, a City trader retired to East Anglia to open a bookshop, is entranced when Edward Avon, a Polish-born customer who was a schoolmate of Julian’s father, quietly but persuasively suggests that the two of them work together to open an annex called “the Republic of Literature” that will stock hundreds of classic titles. He’d be even more surprised if he knew that Edward is being investigated by Stewart Proctor, the Head of Domestic Security, who’s revisiting the heroic work Edward did during the Bosnian War, when, under the code name Florian, this convert from a communist upbringing zealously toiled for Her Majesty’s government until a mysterious debacle abruptly sent him into his own retirement. Proctor’s been tipped off by an unlikely source: Edward’s wife, Deborah, formerly a top Mideast intelligence analyst, has sent him a long letter from her deathbed. Le Carré plays out revelations about Edward slowly and teasingly, and, in the end, they’re as damning as you could wish. The real drama, however, is in the present, where all the characters are hopelessly intertwined and compromised by their loves and loyalties, none of them innocent. The result, as the author’s son, Nick Cornwell, says in a brief afterword, “shows a service fragmented”—and not just the Secret Intelligence Service, but the whole domestic society that depends on it.

The author’s last few novels have been increasingly valedictory, but this one is truly haunted by intimations of mortality.