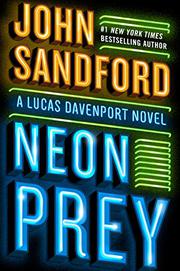 But first he goes south, called from his home in Minnesota to the Louisiana swamp where hired killer Clayton Deese buried at least five people (the total is actually higher) before coming a cropper seven months ago with his latest target, Howell Paine. Things went sideways, sending Paine to the hospital and sentencing Deese to an ankle monitor he sliced through three days ago. Local FBI agent Sandro Tremanty, discovering Deese’s absence, wants help from the U.S. marshals in rounding up his quarry so that he can implicate loan shark Roger Smith, who’d hired him to hurt Paine and send a warning to his other debtors. And there’s another reason the feds would like to get Deese off the streets: His experiments in homicide have given him a taste for human flesh. Soon enough, Lucas, together with marshals Rae Givens and Bob Matees, has picked up Deese’s trail, which leads first to Marina Del Rey, where he’s joined his half brother, Marion Beauchamps, and Jayden Nast, “a guy with guns, who hates cops,” in a brutal home-invasion crew. Conscientious detective work brings Lucas and the LAPD within a whisker of catching Deese, but he slips away from them and heads to Las Vegas with Genesis Cox, the blonde he’s picked up, and John Rogers Cole, another accomplice. Deese and his cohort must constantly pull new jobs to support their gambling and drug habits, and it’s hard to imagine their eluding the law for very long. But there are deeper threats to their racket. Roger Smith, who knows plenty about Deese, realizes he has every reason to get rid of him, and there turns out to be no honor among the thieves closer to home either.

Professionally entertaining, with lots of realistically frustrating false hopes—though it’s hard to worry very much about the leading question here: Will the franchise hero (Twisted Prey, 2018, etc.) succeed in bringing the crooks to justice before they wipe each other off the face of the Earth?