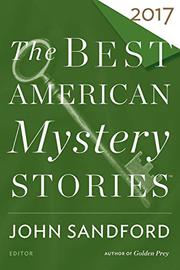 Sandford, creator of the action-packed Lucas Davenport and Virgil Flowers franchises, reprints 20 tales of murder and mayhem in the latest entry of this Penzler-curated series.

Although he would like to engage in “an intellectual tour of the history or theory of short-story writing,” what Sandford really has on offer is a highly masculinized exploration of fairly recent concerns. Fifteen of these stories are by white men, the remainder by white women. Their themes include pursuit and intrusion. A hit man stalks his prey in Gerri Brightwell’s “Williamsville.” A driver pursues a motorcyclist in Wallace Stroby’s “Night Run.” An olfactorily-challenged serial killer seeks his next victim in Peter Straub’s “The Process Is a Process All Its Own.” Men also defend what they see as theirs. An injured boxer looks for the lucky shot that will keep a Mexican upstart from making inroads against his Irish family’s franchise in Doug Allyn’s “Puncher’s Chance.” A pot grower finds a way to keep poachers off his land in Dan Bevacqua’s “The Human Variable.” A rural farmer defends his pregnant wife against intruders in C.J. Box’s “Power Wagon.” And Jim Allyn combines flight and intrusion in “The Master of Negwegon,” a tale of military buddies who team up to catch the fourth member of their crew who’s killed a teenager for despoiling his pristine forest. Readers will find the occasional relationship story. A mobbed-up transplant to California forms an unlikely friendship with an elderly Italian horse-whisperer in Steven Popkes’ “The Sweet Warm Earth.” Joyce Carol Oates offers a tale of love gone wrong in “The Woman in the Window.” And relationships can grow out of intrusion, as the protagonist of K. McGee’s “Dot Rat” discovers.

With its narrow take on what it means to be American, Sandford’s collection seems determined to make the genre great again.