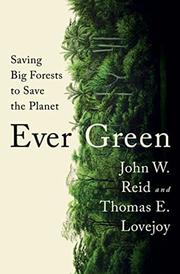 Saving Big Forests To Save the Planet

Why saving the world’s remaining megaforests is crucial to saving the planet.

In this captivating book, Reid and Lovejoy take readers on a journey through the five remaining megaforests—New Guinea, the Congo, the Amazon, the North American boreal zone, and the taiga—vividly describing each region’s native plants and animals as well as their diverse Indigenous populations and cultures. “Megaforests hold staggering human diversity,” write the authors. “Over a quarter of Earth’s languages are spoken in the world’s largest woodlands.” Throughout, the authors make consistently compelling arguments about the importance of saving these regions—not just for the flora and fauna, but for the human denizens. “Over 10 percent of intact forest landscapes were fragmented or lost between 2000 and 2016,” they write. Saving intact forests is vital to combatting rising global temperatures and “once-in-a-century” fires, droughts, floods, and storms that now occur frequently. Reid and Lovejoy point out that one of the primary benefits of megaforests is their ability to remove massive amounts of carbon dioxide from the atmosphere. The plants in these regions are also used by Native peoples for household items, clothing, and medicine. In order for megaforest conservation to work, limiting roads is the most important factor, as the majority of deforestation occurs near roads and navigable waterways. In their call to action, the authors offer feasible methods to make a difference, refreshingly noting that “yes, our individual choices matter.” Sending a message from the inhabitants of the regions, the authors also invite readers to “Go see a big forest! The people who live there want you to experience, directly and with all your senses, what we’ve done our best to hint at between these covers.” Although the idea of saving the forests is hardly new, the language and details the authors use (as well as the included images) to describe these regions lead to an especially powerful message.

A highly readable, eloquent reminder of the dire importance of our forests.