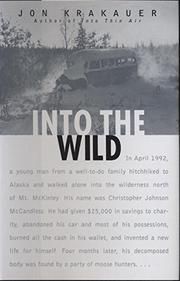 The excruciating story of a young man on a quest for knowledge and experience, a search that eventually cooked his goose, told with the flair of a seasoned investigative reporter by Outside magazine contributing editor Krakauer (Eiger Dreams, 1990).

Chris McCandless loved the road, the unadorned life, the Tolstoyan call to asceticism. After graduating college, he took off on another of his long destinationless journeys, this time cutting all contact with his family and changing his name to Alex Supertramp. He was a gent of strong opinions, and he shared them with those he met: "You must lose your inclination for monotonous security and adopt a helter-skelter style of life''; "be nomadic.'' Ultimately, in 1992, his terms got him into mortal trouble when he ran up against something—the Alaskan wild—that didn't give a hoot about Supertramp's worldview; his decomposed corpse was found 16 weeks after he entered the bush. Many people felt McCandless was just a hubris-laden jerk with a death wish (he had discarded his map before going into the wild and brought no food but a bag of rice). Krakauer thought not. Admitting an interest that bordered on obsession, he dug deep into McCandless's life. He found a willful, reckless, moody boyhood; an ugly little secret that sundered the relationship between father and son; a moral absolutism that agitated the young man's soul and drove him to extremes; but he was no more a nutcase than other pilgrims. Writing in supple, electric prose, Krakauer tries to make sense of McCandless (while scrupulously avoiding off-the-rack psychoanalysis): his risky behavior and the rites associated with it, his asceticism, his love of wide open spaces, the flights of his soul.

A wonderful page-turner written with humility, immediacy, and great style. Nothing came cheap and easy to McCandless, nor will it to readers of Krakauer's narrative.