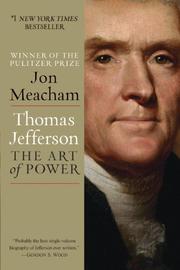 The Art of Power

As a citizen, Jefferson became a central leader in America’s rebellion against the world’s greatest empire. As a diplomat, he mentored a similar revolution in France. As president, he doubled the size of the United States without firing a shot and established a political dynasty that stretched over four decades. These achievements and many more, Time contributing editor Meacham (American Lion: Andrew Jackson in the White House, 2008, etc.) smoothly argues, would have been impossible if the endlessly complicated Jefferson were merely the dreamy, impractical philosopher king his detractors imagined. His portrait of our most enigmatic president intentionally highlights career episodes that illustrate Jefferson’s penchant for balancing competing interests and for compromises that, nevertheless, advanced his own political goals. Born to the Virginia aristocracy, Jefferson effectively disguised his drive for control, charming foes and enlisting allies to conduct battles on his behalf. As he accumulated power, he exercised it ruthlessly, often deviating from the ideals of limited government he had previously—and eternally—articulated. Stronger than any commitment to abstract principle, the impulse for pragmatic political maneuvering, Meacham insists, always predominated. With an insatiable hunger for information, a talent for improvisation and a desire for greatness, Jefferson coolly calculated political realities—see his midlife abandonment of any effort to abolish slavery—and, more frequently than not, emerged from struggles with opponents routed and his own authority enhanced. Through his thinking and writing, we’ve long appreciated Jefferson’s lifelong devotion to “the survival and success of democratic republicanism in America,” but Meacham’s treatment reminds us of the flesh-and-blood politician, the man of action who masterfully bent the real world in the direction of his ideals.

An outstanding biography that reveals an overlooked steeliness at Jefferson’s core that accounts for so much of his political success.