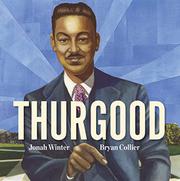 The life journey of the first African American to serve on the United States Supreme Court and the incidents that formed him.

Thurgood Marshall grew up in segregated Baltimore, Maryland, with a family that encouraged him to stand for justice. Despite attending poor schools, he found a way to succeed. His father instilled in him a love of the law and encouraged him to argue like a lawyer during dinner conversations. His success in college meant he could go to law school, but the University of Maryland did not accept African American students. Instead, Marshall went to historically black Howard University, where he was mentored by civil rights lawyer Charles Houston. Marshall’s first major legal case was against the law school that denied him a place, and his success brought him to the attention of the NAACP and ultimately led to his work on the groundbreaking Brown v. Board of Education, which itself led to his appointment to the Supreme Court. This lively narrative serves as an introduction to the life of one of the country’s important civil rights figures. Important facts in Marshall’s life are effectively highlighted in an almost staccato fashion. The bold watercolor-and-collage illustrations, beginning with an enticing cover, capture and enhance the strong tone set by the words.

A larger-than-life subject is neatly captured in text and images.