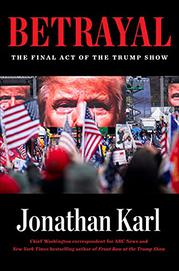 The Final Act of the Trump Show

In the follow-up to Front Row at the Trump Show, the ABC News political correspondent delivers fresh news on the last months of the Trump presidency.

On Jan. 6, 2021, Karl called John Kelly and asked whether Trump, having lost the election, would leave office when his term expired. Kelly answered, “Oh, he’ll leave. And if he refuses to leave, there are people who will escort him out.” What emerges in these pages is that while quiet patriots coaxed Trump to acquiesce, there were also plenty of enablers who encouraged him to stay, from “the crazies” in Rudy Giuliani’s retinue to the insurrectionists who stormed the Capitol. Karl breaks plenty of news. For example, while it’s true that Trump was the rare president who didn’t attend his successor’s inauguration, it’s because Mitch McConnell specifically disinvited him. Trump caught wind beforehand and, in his last tweet, announced that he would not be attending of his own will, which earned him a permanent suspension from Twitter on the grounds that the tweet “was being interpreted by his supporters as a message that he still didn’t consider Biden’s victory legitimate.” Furthermore, although no one will go on record confirming it, members of the Cabinet almost certainly discussed how to invoke the 25th Amendment to remove Trump from office (Trump, of course, vigorously denies it). William Barr, the attorney general who seemed to be Trump’s chief legal enabler, emerges as someone who, at the end of his time in the job, resisted Trump; the same is true of Mark Milley and the heads of the armed services, who Trump assumed would back his power grab. In addition, Trump was itching for a war with Iran as yet another excuse to stay in power. “You really can’t make it up,” the author remarks—an irony, considering the cloud-cuckooland the Trump administration inhabited.

Karl’s message is clear: Trump was bad news, but it could have been much worse.