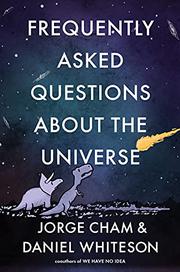 FREQUENTLY ASKED QUESTIONS ABOUT THE UNIVERSE

In this illustrated follow-up to We Have No Idea: A Guide to the Unknown Universe (2017), Cham, a cartoonist and former research associate and instructor at Caltech, and Whiteson, professor of physics and astronomy at the University of California, Irvine, explain the basic science behind subjects that seem to preoccupy the listeners of their podcast, Daniel and Jorge Explain the Universe. Most of the questions involve physics or astrophysics and take the form of, is such-and-such possible?—e.g., teleportation, alien visitors, building a warp drive, entering a black hole). The authors emphasize that they are answering as scientists, not engineers. “A physicist will say something is possible if they don’t know of a law of physics that prevents it.” Thus, a spaceship traveling fast enough to reach the nearest star in a reasonable amount of time is not forbidden by the laws of physics, but building one is inconceivable. Similarly, wormholes and time travel are “not known to be impossible”—as are many other scenarios. Some distressing events are guaranteed. An asteroid will strike the Earth, the sun will explode, and the human race will become extinct, but studies reveal that none are immediate threats. Sadly, making Mars as habitable as Earth is possible but only with improbably futuristic technology. For those who suspect that we are living in a computer simulation, the authors describe what clues to look for. Readers may worry that the authors step beyond their expertise when they include chapters on the existence of an afterlife or the question of free will. Sticking closely to hard science, they deliver a lucid overview of brain function and the debate over the existence of alternate universes that is unlikely to provoke controversy. The authors’ work fits neatly into the recently burgeoning market of breezy pop-science books full of jokes, asides, and cartoons that serve as introductions to concepts that require much further study to fully understand.

A solid foundational education in a handful of lively scientific topics.