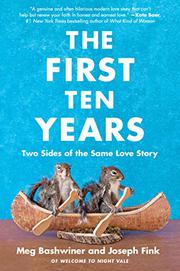 In this joint memoir, Fink and Bashwiner recount the first decade of their relationship.

In a chronological narrative, the authors take turns sharing their perspective of significant events in their lives, beginning with their first meeting in 2009 while selling tickets to an art collective in the East Village. He was from Southern California and hoped to become a writer. She was from New Jersey and dreamed of being in the theater. As their story begins, readers will discover familiar feelings of joy and uncertainty as the authors explore the details of their new relationship, including their first date, first kiss, and, later, the decisions to move in together and to get married. The authors also share accessible moments of doubt, fear, stress, and heartbreak, including fights and disagreements, loss of self-confidence, and feelings of mental and emotional turmoil. However, at the point in the text when their careers begin to take off, the tone and accessibility shift. The details of their careers become the primary focus, especially repetitive discussions from both authors about the creation and ongoing success of Welcome to Night Vale, a podcast based on the concept that the listener has tuned in to a rural radio station in the fictitious Southwest desert town of Night Vale. “It was something we had no control over. We had no choice but to keep saying yes to all the new opportunities it offered us,” writes Bashwiner, whose increased use of profanity begins to lose its emphatic effect as the book progresses. Toward the end of the text, both sides of the narrative begin to turn around, as the authors discuss universally relatable feelings about having children. However, the story never fully recovers.

A fresh take on memoir writing that offers moments of humor and insight but fails to live up to its potential.