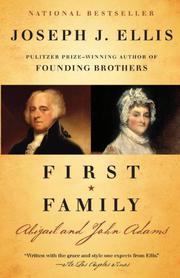 The Pulitzer Prize– and National Book Award–winning author presents a vivid and insightful portrait of John and Abigail Adams.

A telling aspect of John’s nature was his confidence (some might say arrogance) in the fact that his life story would be an important part of the political history of the American Revolution. Because of this prescience, he and Abigail preserved a massive number of documents, including their own personal correspondence. Ellis (American Creation: Triumphs and Tragedies at the Founding of the Republic, 2007, etc.) makes good use of this archive, reconstructing a detailed chronology of the Adams marriage. From the beginning, Abigail was an intelligent and loyal partner, privy to every aspect of John's involvement in the nascent Revolution; the author describes Abigail as a vital “ballast” to John's excitability and mood swings. As his place in the new government strengthened, John was often called away from their Massachusetts home, a circumstance that brought much sadness to the couple but provides historians with intimate letters that the two sent each other throughout each separation. In these, John and Abigail discuss everything from domestic issues to politics to their relationship, displaying the unusually egalitarian and loving partnership they shared. John adored Abigail’s confidence and intellect, and Abigail was proud to support and advise her famous husband as he navigated his remarkably productive political career. This special connection lasted for more than 50 years and survived a litany of domestic hardships amid the political successes, including the heartbreak of witnessing their adult children (excepting John Quincy) devolve into poverty, depression and alcoholism. Despite this, writes Ellis, “Abigail and John remained resolute, infinitely resilient, the invulnerable center that would always hold.” The author’s beautiful writing draws the reader wholly into this relationship, bringing new perspective to the historical importance of this enduring love story.

An impeccable account of the politics, civics and devotion behind the Adams marriage.