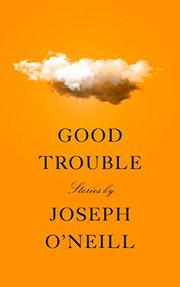 In 11 stories, the author of Netherland (2008) looks at crises, fads, and conundrums among the aging denizens of 21st-century New York.

With six of these stories first appearing in either the New Yorker or Harper’s, it’s clear that O’Neill (The Dog, 2014, etc.) produces well-made, fairly mainstream short fiction. He probes the frictions that make marriages and families fissure or fight for survival, the situations where discomfort breeds anxiety and resentment mushrooms into malaise. A poet who's asked to sign a "poetician" for the pardon of Edward Snowden bemoans Bob Dylan’s Nobel and in his chagrin seems to break out of his writer’s block. The retired teachers in “The Trusted Traveler” accept the “strangely fictional few hours” when a former student joins them for dinner once a year, enduring this time a recitation of his troubles with a sperm bank. An awkward visit to a fertility clinic in “Ponchos” punctuates a man’s ruminations as they swivel between a marriage strained by two years of trying to conceive and the buddy chat of three fellow stool perchers at a diner. There’s often a subversive, comic element in O’Neill’s writing. “The World of Cheese” centers on a rancorous dispute between a woman and her son over his child’s circumcision, but the narrative also notes the father’s new infatuation with cheese, including a “cheesing trip to Ireland.” With a faux academic tone (“Social historians will record”), the narrator in “The Mustache in 2010” moves from a survey of facial hair to a man’s peculiar shaving habits to recalling a contretemps seven years earlier between two people at a charity auction and then finds herself crying even as she tries to parse “the state of the upper-middle-class adventure” objectively: “I’m brushing tears from my eyes, it should be documented.”

A thoroughly enjoyable collection in which O’Neill treats his characters with a wry sympathy and a sense of fun.