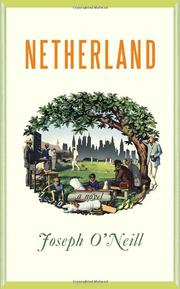 Dutch banker Hans, who narrates the story from the perspective of 2006, and his British wife Rachel, a lawyer, get more than they bargain for when they transfer their jobs from London to Manhattan for an American experience. After the World Trade Center bombing, they move out of their Tribeca loft into the Hotel Chelsea, and soon Rachel decamps with their baby son back to London. Hans visits regularly but the marriage flounders. Distraught and lonely, he joins a Cricket league made up mostly of Asian and Caribbean immigrants. Soon he (along with the reader) falls under the sway of Chuck Ramkissoon, a Trinidadian umpire. Chuck is a charming entrepreneur who has opened a kosher sushi restaurant; an inspiringly patriotic immigrant with plans to save America with Cricket; and a petty gangster running a numbers game. A classic charismatic rogue, Chuck leads Hans on a “Heart of Darkness” tour of New York’s immigrant underbelly. As Hans begins to realize that Chuck might be a dangerous friend to have, Hans and Rachel’s marriage disintegrates. At Chuck’s recommendation, Hans moves back to England to win her back. Throughout, O’Neill plays with the nature of time and memory: Hans’s Dutch childhood with his single mother, for example, still haunts him in New York. The shifting truths of who Chuck has been, who Hans’s mother was, who Hans and Rachel are to each other, depend on what O’Neill calls “temporal undercurrents.”

This love story about a friendship, a place and a marriage is not easy to read, but it’s even harder to stop thinking about.