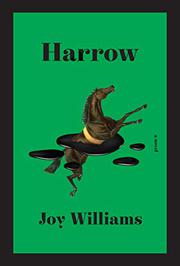 A memorable return for renowned storyteller Williams after a lengthy absence from long-form fiction.

“Something definitely had gone wrong. Even the dead were dismayed.” Something has gone wrong indeed, but in her first novel in 20 years, Williams doesn’t reveal the precise contours of what that something is. There are portents at the outset as the young girl known first as Lamb, then as Khristen, contemplates a bit of family lore recounting that as a newborn she was resuscitated after having stopped breathing and, thus reborn, “was destined for something extraordinary.” So Khristen’s mother believes, in any event, sending her to a boarding school where, Khristen says, “my situation would be appreciated and the alarming gift I had been given properly acknowledged.” Instead, the school dries up, for by Khristen's third year there are no incoming students. Why? There’s no resolution in sight anywhere in Williams’ deliberately paced pre–post-apocalyptic novel: All the reader knows is that something is definitely off, signaled by such moments as when a fellow student, asked to contemplate an orange while pondering creativity, protests, “I haven’t tasted an orange in years.” Khristen takes her place in an odd community on a “razed resort” alongside a dying lake known as Big Girl, populated by the likes of a gifted, spooky 10-year-old and a Vicodin-swilling matriarch named Lola. If nothing else, the place has a working bowling alley, one good place to await doomsday. As the clock ticks away, Williams seeds her story with allusions to Kafka, bits of Greek mythology, philosophical notes on the nature of tragedy, and gemlike description (“He was in excellent physical condition, lean with rage”), and all along with subtly sardonic humor: Williams’ imagined world of the near future is so thoroughly corporatized that even the blades of wind turbines have advertisements on them, and she offers a useful phrase for obituaries to come: “What did he die of?” one character asks, meeting the reply: “Environmental issues.”

An enigmatic, elegant meditation on the end of civilization—if end it truly is.