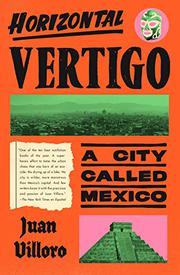 A deeply learned appreciation of the author’s native Mexico City.

Trained as a sociologist but well known to Spanish-speaking readers as one of Mexico’s most acclaimed novelists, Villoro writes appreciatively of a city that is constantly changing—and whose landmarks are different for each generation, if they haven’t been torn down in the course of rebuilding or destroyed by earthquakes. For him, the “outstanding sign of the times is the Latin American Tower,” built in 1956, the year of the author’s birth, and then one of the rare buildings in Mexico City to be more than a few stories tall, since the plateau on which the city sits is both tectonically active and so sandy that building collapse is a real danger. In his lifetime, Villoro notes, the territory embraced by the city megalopolis “has spread out like wildfire” and “grown seven hundred times.” Growth, he adds, “meant spread,” so much so that to find Villoro’s house, located on a street named for the revolutionary figure Carranza, you would have to know which one of 412 streets and avenues named for Carranza it was on. Natural and cultural landmarks are matters of memory and nostalgia, he writes, and since “Mexico-Tenochtitlán buried its lake, and the smog blotted out the volcanoes,” there are few points of orientation. As such, memory has to make up for the destruction of the environment. Along his leisurely, illuminating path, Villoro delivers an essential update of Octavio Paz’s The Labyrinth of Solitude (1950). He can be both brittle and funny, as when he dissects the overstaffed and bureaucratized retail sector. “Although overpopulation is one of our specialties,” he writes, “we have an abundance of stores where there are few customers and an excessive number of workers,” one of whom, the manager, serves as “a final potentate, a Chinese emperor in his Forbidden City.” Celebrating food, wandering through earthquake-struck ruins, reflecting on literary heroes, Villoro makes an excellent Virgil.

An unparalleled portrait of a city in danger of growing past all reasonable limits.