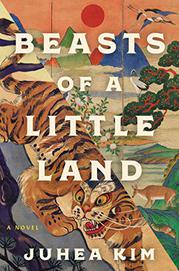 BEASTS OF A LITTLE LAND

In this extraordinary historical novel, debut author Kim weaves together the story of friends and rivals trying to survive and thrive from the era of the Japanese occupation of Korea to the political purges of the mid-20th century. The book begins with a Korean hunter encountering a tiger in the snow when he is captured by a lost squad of Japanese soldiers. With its near-mythic evocations of several kinds of beasts, the prologue establishes the themes of the book. The majority of the novel follows Jade, whose impoverished farming family sends her as a young girl to work as a servant for a courtesan. Jade observes the rivalries of other girls in training, particularly Luna, the spoiled favored daughter of the head of the household, and Lotus, the spirited but plainer younger sister. Thanks to her intelligence and resourcefulness, Jade will grow up to become a celebrated courtesan and movie star in Seoul, where she and the two sisters end up as adults. Together they encounter various men, including the revolution-minded MyungBo, an intellectual fighting for Korean independence; the ever loyal JungHo, the leader of a street gang of orphaned boys; the slick and wealthy patron SungSoo; and the ambitious rickshaw driver HanChol. Jade, Luna, and Lotus fall in love with men from very different backgrounds, but their love and loyalty are not always returned. Kim shows clearly how patriarchy harms these resourceful women in one of the novel's major themes. Late in the book a Japanese general will remark, "How such enormous beasts have flourished in this little land is incomprehensible." He is referring to tigers, but he might as well be talking about the humans who fight here, too.