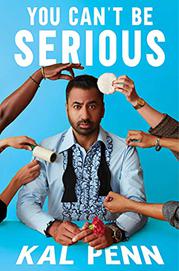 YOU CAN'T BE SERIOUS

How the ambitious, idealistic son of Indian immigrants became a force for change as both a beloved comic actor and an accidental public servant.

Though some news stories about Penn's memoir tout it as a coming-out story, that topic is barely mentioned in this personal history. Bullied for his ethnic background from kindergarten onward, the author points to seeing the Mira Nair film Mississippi Masala at 15 as a life-changing experience, primarily because "brown people" are on screen doing something besides "eating monkey brains," and secondarily because "having sex with someone like Denzel Washington might be a real possibility someday!" Nevertheless, he writes, "discovering my sexuality was still a ways off,” and he doesn’t mention it further until the charming account of finding his current partner during the period he worked in the Obama White House for the Office of Public Engagement. What he does discuss in depth is the outrageous casual racism that plagued every phase of his career, from the agent who wouldn’t meet him in his college days at UCLA, because "you might play a cabdriver once or twice, but it wouldn’t be worth his time and effort to represent someone who isn’t going to work regularly,” all the way through NBC's rough handling of Penn's dream project, Sunnyside, in 2019. After being forced to do an Indian accent during a one-line appearance on Sabrina the Teenage Witch, Penn almost lost the part of a character named “Taj Mahal Badalandabad” in Van Wilder to a White actor in brownface. The one place that the author found diversity and equity was the Obama campaign. His involvement there, and then in the White House, is recounted with characteristic humility and good humor. No mention is made of the Trump years or the pandemic, which seems just as well.

Penn has a pleasing ability to be serious and funny at the same time. A story well worth hearing.