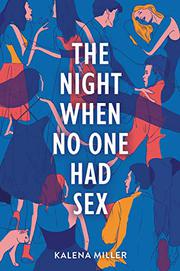 THE NIGHT WHEN NO ONE HAD SEX

A group of friends in Eugene, Oregon, make a pact to have sex with their respective partners after prom in this comedic novel.

Featuring revolving first-person narration shared by four of the characters and interspersed with a group chat that includes the whole group, this engaging, madcap comedy is refreshingly frank in its discussion of sex and the problems that can arise as couples prepare to make good on their plans at the fancy vacation house they’ve borrowed from Zoe’s uncle for the occasion. Only Alex, who rushes to be with his grandmother when she is taken to the hospital, and Leah, the prom date he met only hours earlier after they were set up by a mutual friend, are not part of the pact. Zoe and her girlfriend, Morgan, who’ve had sex before, struggle with discussing changes in their college plans. Morgan’s twin sister, Madison, and her boyfriend, Jake, arrive with condoms in hand but find that a flare of her autoimmune disorder, lupus, and his good-natured but clueless response to it complicate their plans. Finally, Julia’s disappointment that she experiences extreme pain when she and her boyfriend, Kevin, attempt to have intercourse leads them to try out a role-play scenario that ends in situational hilarity. Alex is Korean American; Kevin is Chinese American; and the rest of the characters are White.

A witty, honest debut that shines a light on some very real issues.