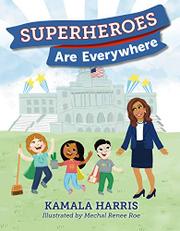 The junior senator from California introduces family and friends as everyday superheroes.

The endpapers are covered with cascades of, mostly, early childhood snapshots (“This is me contemplating the future”—caregivers of toddlers will recognize that abstracted look). In between, Harris introduces heroes in her life who have shaped her character: her mom and dad, whose superpowers were, respectively, to make her feel special and brave; an older neighbor known for her kindness; grandparents in India and Jamaica who “[stood] up for what’s right” (albeit in unspecified ways); other relatives and a teacher who opened her awareness to a wider world; and finally iconic figures such as Thurgood Marshall and Constance Baker Motley who “protected people by using the power of words and ideas” and whose examples inspired her to become a lawyer. “Heroes are…YOU!” she concludes, closing with a bulleted Hero Code and a timeline of her legal and political career that ends with her 2017 swearing-in as senator. In group scenes, some of the figures in the bright, simplistic digital illustrations have Asian features, some are in wheelchairs, nearly all are people of color. Almost all are smiling or grinning. Roe provides everyone identified as a role model with a cape and poses the author, who is seen at different ages wearing an identifying heart pin or decoration, next to each.

Self-serving to be sure but also chock-full of worthy values and sentiments.