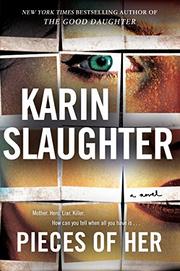 A plain-Jane daughter’s 31st birthday celebration explodes into a nightmare within a nightmare in Slaughter’s latest stand-alone.

Andrea Oliver’s always felt inferior to her parents. Her father, Gordon Oliver, is a trusts and estates attorney; her mother, Dr. Laura Oliver, is a speech therapist. Andy herself has never aspired to any career goal higher than serving as an assistant to someone important. Even when she left Belle Isle, Georgia, for the Big Apple, she got nowhere, and she was only too eager to return home when her mother announced three years ago that she’d been diagnosed with breast cancer. As the two women mark Andy’s birthday by sharing lunch in a mall cafe, a crazed shooter opens fire on a mother-and-daughter pair who’ve stopped to greet Laura, and Andy’s life changes in an instant. Or rather two instants, the first when the shots ring out and the second when Laura, after inviting the killer to shoot her next, coolly and dispassionately dispatches him. It takes the dazed Andy hours to realize that her mother’s not at all who she seems to be, and by the time she’s ready to accept the fact that Laura Oliver is a woman with a past, that past is already racing to catch up with both mother and daughter. Cutting back and forth between Andy’s harrowing flight to nowhere after Laura pushes her out of her home and a backstory 30 years earlier involving the Army of the Changing World, a cell of amateur terrorists determined to strike a mortal blow against greedy capitalists and, it eventually turns out, each other as well, Slaughter (The Good Daughter, 2017, etc.) never abates her trademark intensity, and fans will feel that the story is pumping adrenalin directly into their bloodstreams. Long before the end, though, the impostures, secret identities, hidden motives, and double-crosses will have piled up past the point of no return, leaving the tale to run on adrenalin alone.

Reading anything by Slaughter is like riding a particularly scary amusement park ride. Reading this one is like booking a season ticket on a ride that never lets you off.