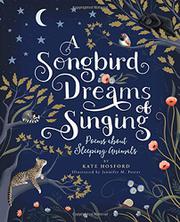 A SONGBIRD DREAMS OF SINGING

Firmly in control of language and rhyme schemes but varying tone and tempo as she goes, Hosford marvels at the sleep habits of 18 creatures. These range from sperm whales (“Oh mighty mothers of the sea / Why do you slumber vertically?”) to fire ants (“You didn’t know, perhaps / That this ant takes power naps. / It’s quite a short collapse. / (Sixty seconds will elapse.) / How many naps will there be? / About two hundred and fifty-three.” In the substantial prose glosses that accompany each short poem, she offers further downtime marvels, such as how some whales sleep head up or head down, or even drift between the two positions, and a tale of a desert snail that was exhibited at the British Museum as an empty shell for four years, then successfully revived. Nor does she leave readers in the dark about how some animals rest parts of their brains in succession or the differences among nocturnal, diurnal, crepuscular, and cathemeral creatures, covering these facts in an opening author’s note. In Potter’s suitably dreamy, subdued illustrations, floating sea otters hold paws, ocelot cubs nestle in a cozy hollow, a “flamboyance” of flamingos stand one-legged in shallow water, and even an upside-down jellyfish (“It isn’t easy to explain / How she’s so smart / without a brain”) looks drowsy.

At once eye-closing and eye-opening.