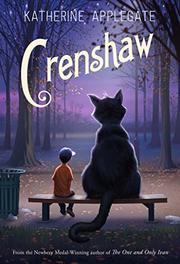 Applegate tackles homelessness in her first novel since 2013 Newbery winner The One and Only Ivan.

Hunger is a constant for soon-to-be fifth-grader Jackson and his family, and the accompanying dizziness may be why his imaginary friend is back. A giant cat named Crenshaw first appeared after Jackson finished first grade, when his parents moved the family into their minivan for several months. Now they’re facing eviction again, and Jackson’s afraid that he won’t be going to school next year with his friend Marisol. When Crenshaw shows up on a surfboard, Jackson, an aspiring scientist who likes facts, wonders whether Crenshaw is real or a figment of his imagination. Jackson’s first-person narrative moves from the present day, when he wishes that his parents understood that he’s old enough to hear the truth about the family’s finances, to the first time they were homeless and back to the present. The structure allows readers access to the slow buildup of Jackson’s panic and his need for a friend and stability in his life. Crenshaw tells Jackson that “Imaginary friends don’t come of their own volition. We are invited. We stay as long as we’re needed.” The cat’s voice, with its adult tone, is the conduit for the novel’s lessons: “You need to tell the truth, my friend….To the person who matters most of all.”

Though the lessons weigh more heavily than in The One and Only Ivan, a potential disappointment to its fans, the story is nevertheless a somberly affecting one