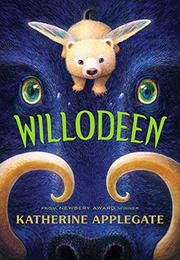 An orphan loner’s small town faces a hard future after it unwittingly disrupts a natural cycle.

Willodeen is lucky that elderly retired thespians Mae and Birdie took her in after the wildfire that killed her parents and brother, not only because they’re a loving couple, but because they let her roam the woods in search of increasingly rare screechers—creatures so vile-tempered and stinky that the village elders of Perchance have put a bounty on them. The elders have other worries, though: The migratory hummingbears that have long nested in the area, drawing tourists to the lucrative annual Autumn Faire, have likewise nearly vanished. Could there be a connection? If there is, Willodeen is just the person to find it—but who would believe her? Applegate’s characters speak in pronouncements about life and nature that sometimes seem to address readers more than other characters, but the winsome illustrations lighten the thematic load. Screechers appear much like comically fierce warthogs and hummingbears, as small teddies with wings. Applegate traces a burgeoning friendship between her traumatized protagonist and Connor, a young artist who turns found materials into small animals so realistic that one actually comes to life. In the end, the townsfolk do listen and pitch in to make amends. Red-haired, gray-eyed Willodeen is cued as White; Connor has brown skin, and other human characters read as White by default.

The young folk and (of course) the animals are engagingly wrought in this tale with a strong ecological message.