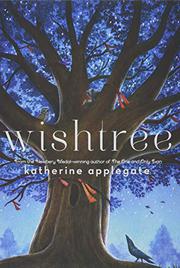 Generations of human and animal families grow and change, seen from the point of view of the red oak Wishing Tree that shelters them all.

Most trees are introverts at heart. So says Red, who is over 200 years old and should know. Not to mention that they have complicated relationships with humans. But this tree also has perspective on its animal friends and people who live within its purview—not just witnessing, but ultimately telling the tales of young people coming to this country alone or with family. An Irish woman named Maeve is the first, and a young 10-year-old Muslim girl named Samar is the most recent. Red becomes the repository for generations of wishes; this includes both observing Samar’s longing wish and sporting the hurtful word that another young person carves into their bark as a protest to Samar’s family’s presence. (Red is monoecious, they explain, with both male and female flowers.) Newbery medalist Applegate succeeds at interweaving an immigrant story with an animated natural world and having it all make sense. As Red observes, animals compete for resources just as humans do, and nature is not always pretty or fair or kind. This swiftly moving yet contemplative read is great for early middle grade, reluctant or tentative readers, or precocious younger students.

A deceptively simple, tender tale in which respect, resilience, and hope triumph.