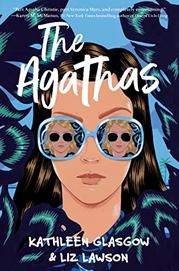 Two high schoolers team up to investigate a classmate’s death and discover that their small California town is positively aboil with secrets.

Seething at the oddly lackadaisical response of local police to the disappearance of her former BFF on Halloween, 17-year-old Agatha Christie fan Alice Ogilvie enlists Iris Adams, her peer tutor, to launch an inquiry that not only bears immediate fruit in the form of a battered corpse at the base of nearby seaside cliffs, but leads to a veritable flood of obvious but conflicting clues and revelations that point to, and away from, foul play. Which was it? As the two gather and struggle to make sense of their evidence in traded-off chapters (with help from a squad of enthusiastic would-be fellow sleuths and a savvy public defender with flexible ethics), readers quickly twig to the fact that they themselves are nursing secrets. Along with frequent references to Christie’s books and tumultuous personal history, the co-authors stir in classic mystery tropes and complications aplenty. Though evidently all White, the students at Castle Cove High are split between fabulously wealthy A-listers and working-class kids; as events speed along to a surprise denouement (albeit not in a drawing room) with a violent but decisive resolution, class tensions play out, sometimes viciously, between the protagonists as they warily circle one another on the way to a firm bond.

A generous dollop of homage to the grande dame of mystery plus buckets of clues and conundrums to savor.