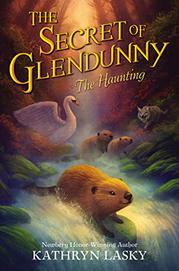 Dunwattle, a young beaver kit, has inadvertently broken the most sacred rule in Glendunny.

During the reign of Henry VIII, all beavers left England to escape being hunted to extinction. They established a thriving civilization in Glendunny, a vast, secret pond hidden in a deep forest in Scotland. To keep Glendunny safe, beavers must never allow themselves to be seen by a two-leg. One morning in the present day, Dunwattle sees the ghostly bones of a two-leg’s skeleton. Terrified, he swims all the way to England, where a living human two-leg sees him and takes a photo. Heading home, he’s determined to keep his terrible secret. There follows an intricately plotted, wonderfully realized adventure involving all the creatures of the pond and, yes, two-legs, alive and dead, each with strong, distinct personalities and backstories as Dunwattle, along with friends Locksley and Yrynn, helps human ghost siblings Lorna and Fergus find their way to heaven. There is evil, betrayal, cruelty, loss, compassion, kindness, a touch of humor, and heart-stopping adventure. The swan Elsinore is intelligent, pragmatic, and a deeply moral force who keeps watch and intervenes when needed. The carefully constructed fantasy world holds perfectly true, always within the parameters set forth by the author. The invented language has a Scottish flavor, with subtle differences among the species. Further dimension is added by the detailed and beautifully expressed descriptions of place, action, and characters.

Draws readers deeply into a mystical world and leaves them wishing for more.