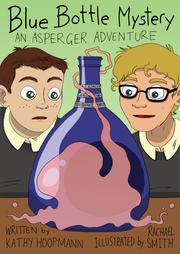 In this graphic version of a 2001 novel, a lad with Asperger syndrome finds the world at least a little easier to navigate after he unearths a magic bottle.

Naturally hoping that there is a genie inside the big blue flask they find in the shrubbery, Ben and his short friend, Andy, engage in a round of wild wishes before passing the discovery on to Ben’s crabby teacher in hopes of softening her up. A few days later, Ben and his widowed dad win big in the lottery, and Andy experiences a sudden, major growth spurt that earns him a coveted spot on the school’s basketball team. But what was that third wish? They can’t remember, until an amusing twist leads to a resolution. Superimposed on this plotline with almost no actual contact is an infotale centered on Ben’s condition that features frequent expository asides (“I feel comfortable when things are the same”) and includes experiences with his teacher’s mood swings and, later, with a pair of bullies. This leads to a diagnostic tally of Asperger causes and symptoms delivered to his clueless father by a doctor—from secondhand descriptions, apparently, since she never actually meets her patient in the book. The block-lettered dialogue and narrative are legibly clear, as are the figures’ actions in the simply drawn sequential panels.

Two stories, both sketchy, that, while not actually at cross purposes, never really move in tandem.