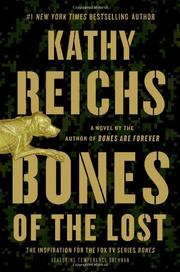 BONES OF THE LOST

A three-course banquet of old bones, and some not so old, for forensic anthropologist Temperance Brennan (Bones Are Forever, 2012, etc.).

The grab bag begins—if you don’t count a shrill, miscalculated flash-forward prologue—with some mummified bones the Customs Service has confiscated from hideously disfigured Desert Storm vet Dominick Rockett. He maintains that he’s legitimately imported the antique dog bones from Peru; Immigration and Customs Enforcement agent Luther Dew smells smuggling or worse. Before Tempe can file her report, however, her attention is demanded by some much more recent remains. A Jane Doe the police found dead along the highway shows every sign of a sorry life—prostitution, drugs, violent death—that ended, according to Tempe’s examination, at age 15. What can she tell behemoth Detective Erskine “Skinny” Slidell, of the Charlotte PD, that might help identify the victim or her killer? Despite a pair of cryptic anonymous phone calls about the young woman, this second case languishes long enough for Tempe to pick up a third. Second Lt. John Gross, whose uncle is an old friend of Tempe’s all-but-ex Janis “Pete” Peterson, has been accused of shooting unarmed Afghani villagers in the back. If Tempe will only drop everything and travel to Afghanistan to take part in the official inquiry, Pete tells her, she’ll get to see Katy, Tempe’s daughter, who reacted to her boyfriend’s death there by enlisting herself and shipping out. Tempe can’t help feeling that at least one of these cases involves sex trafficking, though Slidell warns her, “Smuggling dead dogs is one thing. Smuggling kids is a mighty big leap.”

Reichs, never one to stint on complications, deals them out mostly seriatim instead of intermingling them, and it’ll be a canny reader who sees the thread that runs through all the cases and binds them together.