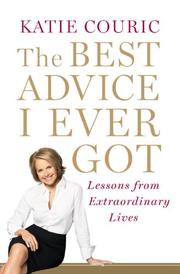 THE BEST ADVICE I EVER GOT

Award-winning anchor of the CBS Evening News compiles insights and advice from influential public figures for any stage of life.

What do Beyoncé and General David Petraeus have in common? They’re among the more than 100 entertainers, entrepreneurs, political figures and journalists doling out words of wisdom in Couric's collection. In an easy-to-read format, the author assembles an array of advice from successful people, and her tone is casual and upbeat. Divided into different themes, such as courage, hard work and contribution, the book veers between the humorous and the poignant. Finance expert Suze Orman describes her struggles as a waitress, and late war hero Edmund N. Carpenter II shares his approach to life in a candid essay he wrote in 1938 at the tender age of 17. Couric seamlessly weaves in the lessons she has learned along the way, sharing anecdotes from her own life, which has not been without hardship. She opens up about her husband's early death from cancer and the sexist attitudes she faced as the first woman to solo-anchor a major newscast. Most of the advice found here isn't earth-shattering—Bill Cosby says he was his own worst enemy, Larry King suggests readers "learn how to listen"—but it comes from people who have excelled with talent, luck and lots of hard work. The author's profits will be donated to Scholarship America, an organization that helps students go to college.  Readers looking to browse for a little inspiration can also help a worthy cause.