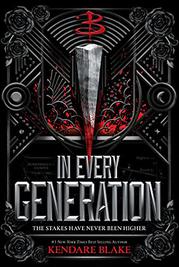 Sunnydale has a new slayer.

Set in the world of TV’s Buffy the Vampire Slayer, this first installment in a new series focuses on a new generation. Frankie Rosenberg’s mom is the powerful witch Willow, friend to famed slayer Buffy. Frankie’s own minimal powers are mostly used for ecological purposes until there’s an explosion at a slayers’ meeting, leading Frankie to become the first ever slayer-witch. A slayer needs her crew of Scoobies, and under the guidance of Watcher Spike, Frankie is assisted by Hailey, half sister of missing slayer Vi; werewolf lacrosse player Jake; and Sigmund, a Sage demon. Frankie may be new to the gig, but she has to learn quickly because there’s a new Big Bad in Sunnydale who is out for blood. The book provides enough information for patient newcomers to the Buffyverse to enjoy the story, but it will be most appealing to those with at least some background knowledge who will appreciate the references. Though the pacing is inconsistent, exciting action scenes abound, and the villain is intriguing and delightfully vicious. The characters’ banter and observations are often cheeky and funny but sometimes fall flat, as when they are based on gender stereotypes. The abrupt ending satisfyingly wraps up some plots, but there are plenty left open for future entries. Most characters are White; Hailey’s mom was Saulteaux First Nations, and Sigmund is Black.