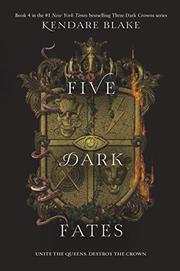 As Arsinoe turns to low magic in a frantic effort to cure Jules’ legion curse, Mirabella abandons the rebel army for Katharine. But the dead queens possessing the Queen Crowned grow ever more bloodthirsty, and all Fennbirn Island may have to pay the cost. The earlier books assembled huge casts to wrangle and an enormous tangle of plot threads to tie off, so it’s no surprise that even with its considerable heft, this tome feels a bit crowded and rushed. But if Blake (Two Dark Reigns, 2018, etc.) relies on a deus ex machina (or, more accurately, a dea ex caverna) to resolve otherwise intractable narrative knots, she does not stint on her characters: Each one is a complicated, sympathetic individual with intelligible motivations despite their often bloody deeds. As the story digs into the legendary history of Fennbirn’s matriarchal culture—apparently default white but also intriguingly default female and explicitly not default heterosexual—it gains greater depth and richness. Yet this world remains harsh, dark, and graphically violent, filled with impossible choices and dreadful sacrifices; As everyone fights, betrays, or tries to flee, all are inevitably drawn to the climactic clash that leaves no one unscathed.

Things may not end happily ever after, but they do end just right.