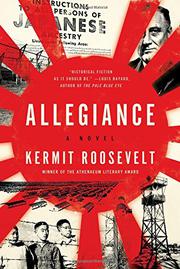 In Roosevelt’s (In the Shadow of the Law, 2005) latest, the Axis attacks, and newly minted attorney Cash Harrison learns that too many powerful people think the " Constitution just a scrap of paper."

With a world war raging, many Americans believe it's justified to confine Japanese-Americans to detention camps: "The interests of the individual must be weighed against the needs of national security." Harrison is from an old Main Line Philadelphia family, sufficiently acquainted with the right people—people who might say about an artist that he "made Christ look too Jewish"—to be unknowingly classified 4-F and then offered a slot as a Supreme Court clerk. Harrison finds that it's the clerks' job to read the many petitions for certiorari and help the justices decide which cases to hear. And it’s not long before he believes his fellow clerk Gene Gressman is right in suspecting someone is "manipulating the court" via the clerks. Then Gressman’s found dead, his frail heart blamed, and Harrison is afraid he was killed because of the internment cases. He wants to find the truth and so asks Attorney General Francis Biddle, another Main Line denizen, for work at the Alien Enemies Control Unit. The plot is a Russian matryoshka, layered and deceptive. The decision to intern Japanese-Americans, "made in good faith for the safety of the nation," could be linked to profits made by "acquiring Japanese land." Historical characters such as Biddle, Secretary of War Henry Stimson, and justices Hugo Black and Felix Frankfurter arrive on the page arrogant, patronizing, and elitist, making for a depressing (and perhaps overly long) tale lightened only by Harrison finding honor, and love, in a San Francisco court hearing.

A Kafkaesque political drama as allegory for America’s blind quest for absolute safety from international terrorism while "the interests of capital" profit from paranoia.