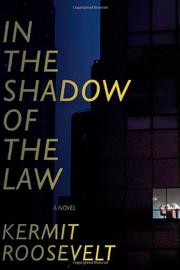 IN THE SHADOW OF THE LAW

Fresh young associates and cynical old partners do battle with shifty prosecuting attorneys, soulless corporations, treacherous families and each other, in an issue-packed first novel from a young, famously monikered Penn law professor.

Skillfully pitching to the latest generation of young lawyers now facing the shock of the law in practice v. the law in school and wondering whether the career will be worth the huge student loan, Roosevelt sets a brood of Ivy-educated fledglings in a richly feathered nest on K Street. Earnest, sleep-deprived Mark Clayton, equally earnest distance-running Katja Phillips, terminally shallow Ryan Grady and former Supreme clerk Walker Eliot have begun their careers at D.C. power firm Morgan Siler, pulling down six-figure salaries but, with the exception of superstar Walker, nearly collapsing under odious and endless assignments. The firm is girding for battle in the defense of a careless Texas chemical firm against a class action suit featuring a shocking number of dead low-wage workers, and the young associates must learn the ins and outs of the corporate shell game crafted by Morgan Siler to insulate the chemical company from just such pesky problems. Glamour boy Walker, meanwhile, has saddled poor Mark with the pro bono defense of a soon-to-be-executed Virginian whose family seems a little too easily resigned to the man’s fate. Alternating trips to the Texas Chernobyl, where the locals despise the Washingtonians and the only motel is a dump, with drives to Norfolk, where the executioner’s clock is ticking but the hotel is luxe, Mark begins to piece together the alleged murderer’s defense. Meantime, Katja works her way through boxes of documents until she accidentally stumbles on unpleasant truths about the toxic fire, unaware that she is becoming ever dearer to the heart of a clever but lonely and much older litigator. And at the top of the heap, the stuffed-shirt son of the firm’s founder ponders the idea of a trophy wife.

Possibly a roman á clef, but the clef probably fits any number of doors. Entertaining if a little long-winded.