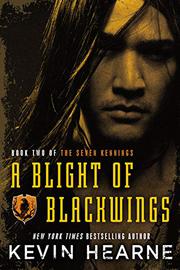 A BLIGHT OF BLACKWINGS

Book 2 of Hearne's latest fantasy trilogy, The Seven Kennings (A Plague of Giants, 2017), set in a multiracial world thrust into turmoil by an invasion of peculiar giants.

In this world, most races have their own particular magical endowment, or “kenning,” though there are downsides to trying to gain the magic (an excellent chance of being killed instead) and using it (rapid aging and death). Most recently discovered is the sixth kenning, whose beneficiaries can talk to and command animals. The story canters along, although with multiple first-person narrators, it's confusing at times. Some characters are familiar, others are new, most of them with their own problems to solve, all somehow caught up in the grand design. To escape her overbearing father and the unreasoning violence his kind represents, fire-giant Olet Kanek leads her followers into the far north, hoping to found a new city where the races and kennings can peacefully coexist. Joining Olet are young Abhinava Khose, discoverer of the sixth kenning, and, later, Koesha Gansu (kenning: air), captain of an all-female crew shipwrecked by deep-sea monsters. Elsewhere, Hanima, who commands hive insects, struggles to free her city from the iron grip of wealthy, callous merchant monarchists. Other threads focus on the Bone Giants, relentless invaders seeking the still-unknown seventh kenning, whose confidence that this can defeat the other six is deeply disturbing. Under Hearne's light touch, these elements mesh perfectly, presenting an inventive, eye-filling panorama; satisfying (and, where appropriate, well-resolved) plotlines; and tensions between the races and their kennings to supply much of the drama.

A charming and persuasive entry that will leave readers impatiently awaiting the concluding volume.